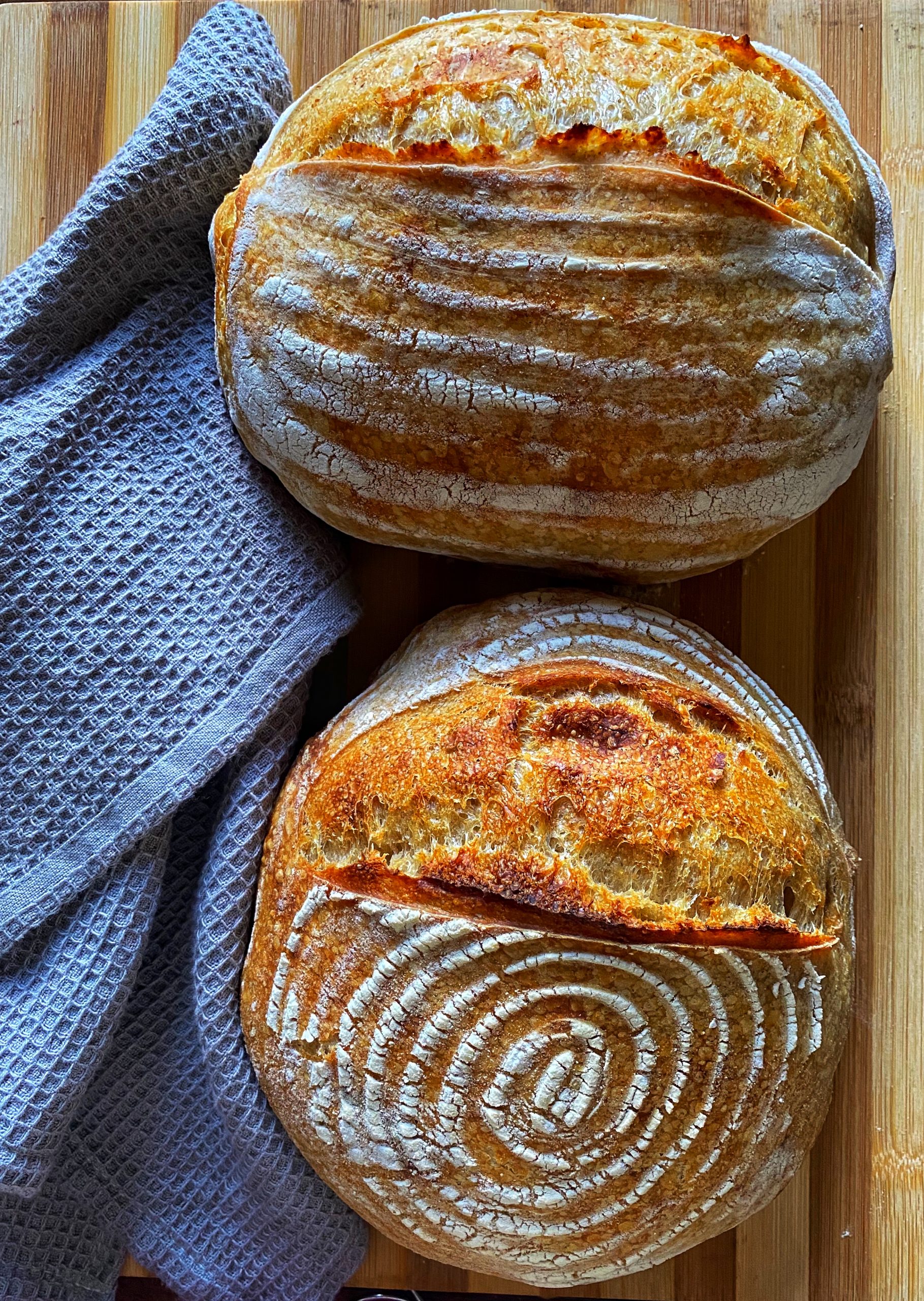 Disclaimer – As of the writing of this post, I am very new to making sourdough bread – these are my suggestions for newbies who have been having difficulties with their starter/ bread.

I am utterly late to this party, but boy am I glad to be here. I blame it on Instagram and the lockdown. My feed was inundated with pics of baked goods and among them was a common refrain – look at my sourdough bread!

If you’ve landed on my page, I’m guessing you have some idea already about sourdough bread and are just looking for some tips to get your bread going that you may not have found anywhere else so far.

I had always been familiar with the “concept” of sourdough bread, having eaten it some years ago on one of my vacations abroad. I even have a memory of getting some starter from someone way back in secondary school that never made it into anything besides the garbage. My mother thought it was “nasty” and so, it was dumped.

Fast forward several years later and to say my interest has been piqued is an understatement. The concept of making bread without packaged yeast, from some runny bubbly goo seemed unreal and yet, so many bakers were doing it and seemingly without much effort.

So, naturally, I plunged in. I did my google and YouTube research and felt that I had everything I needed to get going. Boy was I wrong, and made wrong a few times more.

This was not as easy as everyone was making it out to be!

I confess that I abandoned all hope a few times, believing that it was somehow beyond me. That only lasted a week or so, and then I was back at it – I’m glad I persevered! Here were my challenges:

If your problem is that the starter is bubbling but not rising, read below.

Goodness. all you have to do is google how to make sourdough starter and the differing schools of thought that you will come across will make your head spin. I do acknowledge that by making this post, I am also adding to the never-ending glut of information on how to make starter/ sourdough bread. It is my hope that my tips actually work for you and get you well on your way to some delicious bread.

I began with, as recommended by one of the many experts out there, 50g whole wheat flour and 50 g water (I used regular pipe water). I live in a tropical region and my starter loved it! It was off to a rapid, beautiful start. I was a bit naïve when I first started, and felt super confident when my starter bubbled and doubled. But I was soon humbled when on day number two of feeding (you have to feed your starter for seven days minimum), all I got was soup. The ratio I was using that I found during my research was half cup of starter, half cup of whole wheat flour and half cup of water. I mixed well and put in a warm place to rise.

Day 3 – NADA. Just a few bubbles but no rising.

Fed each day up to Day 7, and still no rising.

Switched to a formula that said there should be a 1:1:1 ratio between the starter/ flours/ water (50g starter/ 50 g flour/ 50 g water). And guess what. Still no rising when I started over and fed on Days 3 to 7.

I decided to switch it up once more. Someone said, it should be 2 tablespoons starter (25grams) to 100 grams flour and 100 grams water (1:4:4 ratio). Andddddd, you guessed it – still no rising! Just bubbles and more bubbles. I was getting frustrated.

One of the many videos I subsequently watched said to give it a day and see what would happen, don’t over feed. So I left it for another day without feeding and wouldn’t you know it, I got hooch forming in the starter.

So, on to more conflicting information. Some people said stir in the hooch, others said to throw it off and yet some more said you shouldn’t let the starter get to that point in the first place.

Needless to say, I tried many iterations of keeping the hooch, throwing it off, feeding more often, less often… whew! I used organic unbleached flour, bread flour, all purpose flour, whole wheat flour and rye flour. And you guess it, still only had bubbles and no rise. And most everyone was in agreement that the starter had to be more than a week old and had a consistent rise and fall after feeding (even though someone said that you shouldn’t let the starter drop, that you should feed it just before it falls – ummm, how???) in order to make bread.

I was determined though and finally seemed to enter the right words into google to get some help for my problem “starter has bubbles but not rising.” A few posts that I’d already harvested for information came up, but it was an obscure one that I clicked on that made my sourdough starter woes disappear. Someone else was experiencing my same issue and this wise person said that the hydration needed to be reduced, i.e. reduce the amount of water to 80% of what was going in presently and see if that works.

And boy did it work!

Here’s the formula that worked for me – from Day 2 onwards, it should be:

During my seemingly endless perusal of the internet for help, it was mentioned that you could put your starter in the oven with the light on, loosely covered and that would help things along. Oh, a quick diversion – on the matter of covered versus keeping the lid ajar or loosely covered, I found that closing the jar completely worked for me. The yeast is apparently also within the flour itself rather that simply floating in the air etc, so for me, covering didn’t stifle the starter one bit.

Right, so, I put the starter in the oven, covered with the light on, and within a few hours my starter had risen. I was so excited to see it rise! It was indeed a lovely thing to see after weeks of frustration.

Now, on to THE BREAD.

If your problem is that your bread won’t rise, dough spreads and won’t hold its shape, read below.

When are you supposed to be able to use your starter? I’d say, follow the generally accepted rule of making bread maybe two weeks after Day 7. You can put the starter in the fridge on Day 7, but to use it to make bread, I suggest making a levain (using a small amount of the fridge starter to feed and grow and use all of that in the bread, while putting the original back in the fridge) and make sure that it rises and falls consistently after feeding to make sure it will be active in the bread.

I also encountered a baking fail before I was able to make these delicious loaves you see here, where my bread barely rose and didn’t hold it’s shape. I followed a very popular recipe on YouTube and wound up tossing it.

Here’s what worked for me:

– Making sure that the flour isn’t over-hydrated. It’s easier to add water than to toss in more flour
– Let the bread soak up the water first, rest then add the starter
– Make sure you do the window pane test!
– Follow FoodGeek’s recipe (video and blog post)

I’m not an expert sourdough baker, so I won’t go into all of the other details that you’ve probably encountered by now, but my aim was to shed some light on a problem that I had difficulty finding the answer to. I hope this helps because once your starter is off and running, you are halfway there to getting a delicious sourdough loaf on your table in short order.

Here are my results: