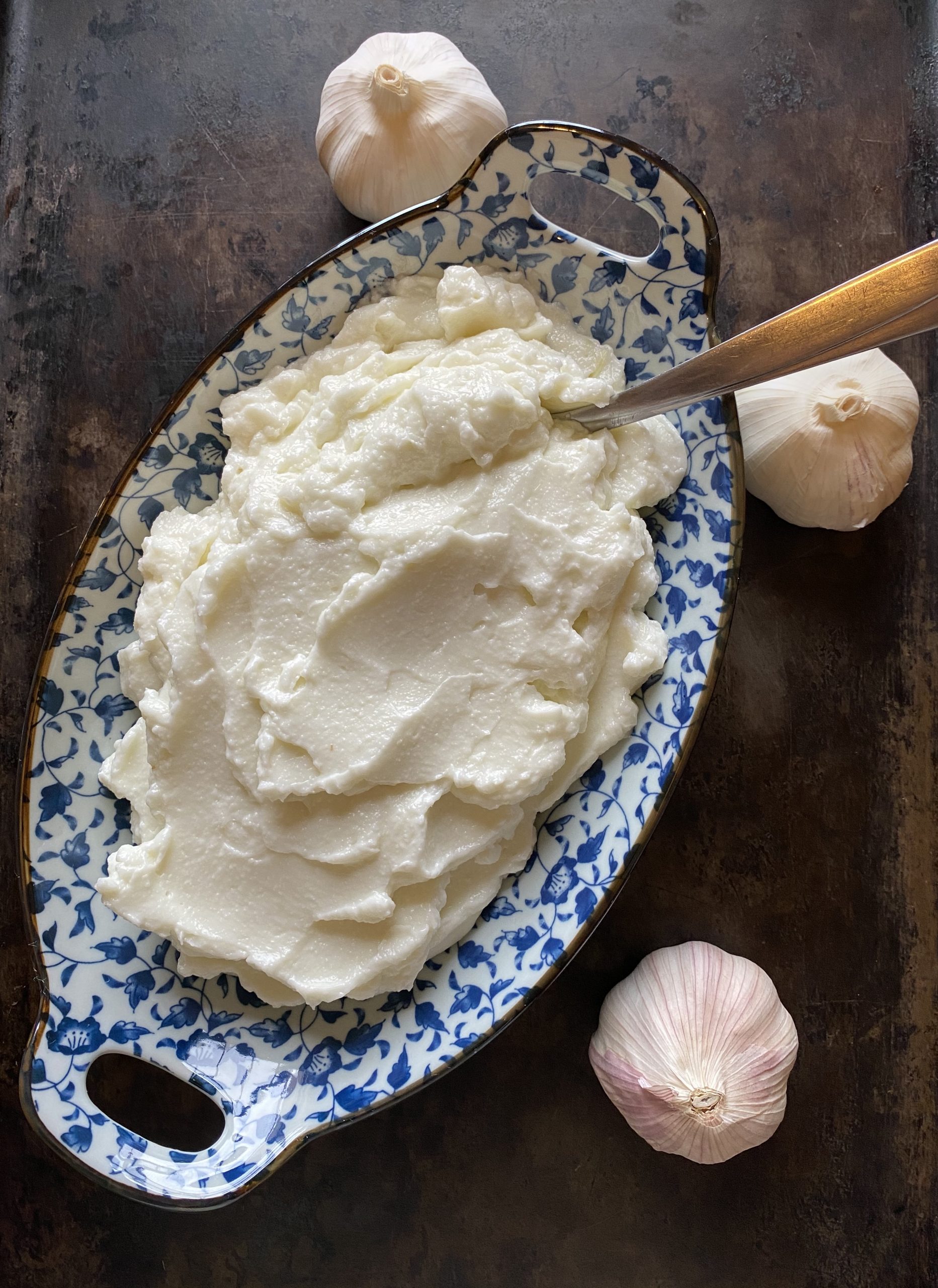 I think the first time I stumbled upon this spread was on instagram. I was scrolling through many a recipe and saw a lady making something called toum. The name alone captured my attention and for the ten minutes following my “discovery”, I sat rapt as she effortlessly transformed garlic, water, lemon juice and oil into this magical, fluffy, delicious looking thing that I simply had to try.

And try it I did. It didn’t look too hard and I had all of the necessary ingredients to boot! And so I set to work. I did some more research and found out the nitty gritty details like how the garlic should look and what kind of oil I should use, etc etc.

So, doubly armed with knowledge and ingredients, I set to work. And might I say, it was three of the most frustrating experiences in my “culinary” life. I’ve made many a recipe with difficulty level labeled as “Advanced” and got through just fine. So why wasn’t this working for me?

I clearly had forgotten that many of these people who make things look super easy have what I call “old hands” that is, they have been making that particular recipe for years and years and it was silly of me to think that I could just come along and do it in one go.

Well, it took me four go’s to get it to what I think is right. And if you are like me and tried and tried and tried to get your toum to come out right and failed each time, I have some tips and an excellent recipe that will get you well on your way – like me! – to being a toum maker with “old hands”.

Save by an egg white

Followed the lady’s recipe that called for one cup of garlic topped with water, four cups of oil and a splash of lemon juice at the end. I followed this recipe to a T and nearly cried, when after slowly pouring in four cups of avocado oil, it dawned on me that this liquidy mess was NOT going to come together no matter how fast I made the food processor go. Luckily, I found a site that said to mix 1/4 cup of the broken toum with one egg white and slowly drizzle back into the mix. I did that and BEHOLD! It came together, but I couldn’t help but notice that it didn’t quite look like the pics on the blogger’s site. It was really, REALLY delicious, but I felt that I’d done it wrong because I needed the egg white save.

ATTEMPT NO. 2 – didn’t remotely come together

Nothing could save it – not even a trusty egg white

So after the relative success of the first attempt, I tried it again because, as it was so delicious, even in its imperfect state, that I had to try again. I repeated the recipe and this time, I could tell that it was headed for a failure early on, but I’m no quitter, dang it, and I pressed on, even revving the processor up to the higher speed. Quick (rhetorical) question, is it possible to turn oil into water? Because I’m not kidding you, by the time I was done, the liquid resembled GREEN WATER. No one would have ever guessed I’d spent half hour of my life slowly pouring oil into garlic mash only to get that result.

ATTEMPT NO. 3 – failed even more spectacularly this time around

Nothing could save it – not even an ice cube

Would you believe I tried this same recipe one more time? The exact same one. What is it they say about doing the same thing over and over again and expecting different results? In my defense, hers seemed to come together without a problem! It had to be me. After all, she knew more about the recipe and had more experience making it that me. I figured I’d probably poured the oil too quickly and maybe didn’t add enough lemon juice. Since the egg white trick didn’t save it the last time, I did some more research and read that plopping an ice cube in the mess could save it. Maybe under different circumstances, but this was irredeemable.

I’ll skip the details on the part where I marched the soupy, green mess out my back door and doused some unsuspecting plants with it.

No egg whites or ice needed.

This time, I went with a different recipe. As much as I love perusing this blogger’s gorgeous pages of recipes, I firmly believe that maybe, just maybe she’d left out a few steps and maybe didn’t include every single thing she’d done.

This recipe, that I’ll link below, called for only 3 cups of oil, 1/4 cup of lemon juice and 1/4 cup of water. But what neither this recipe nor the one I kept failing at mentioned, was this little tidbit that I found while scrolling through the reviews… the garlic must absolutely be pulverised from the get go.

The first recipe called for mixing the water and garlic together and blending it first. The second recipe only wanted the garlic and some salt blended together. My food processor couldn’t get it to a nice paste with just the garlic and the salt, so I put them in my nutribullet and pulverised them before adding back to the food processor.

Next, this second recipe called for alternating 1/2 cup of the oil, slowly drizzled with one tablespoon of the lemon juice. Now, quick note on the oil drizzling. If you think you are going slowly, you’re not. Go even slower. Trust me. And I found that pouring the oil in through the little hole at the top meant for this purpose didn’t quite do the best job, so I poured it in slooooooooooowly through the opening where you feed in your veggies. When all of the lemon juice is used up, switch to alternating with ice cold water until the oil is used up.

Tip – if it doesn’t start fluffing up during the first 1/2 cup to 1 cup of oil being added, then it probably will split. I didn’t need to use the egg white fail safe this time around, but this second recipe calls for using it if it doesn’t quite come together.

When it was all said and done, I had a fluffy sauce with a mayonnaise type consistency and it tastes amazing!.

If you want a successful toum, and are inexperienced at making it, avoid my pitfalls by following this recipe by serious eats and my tips to have it turn out perfectly!

If you give it a try, I’d love to hear about it!